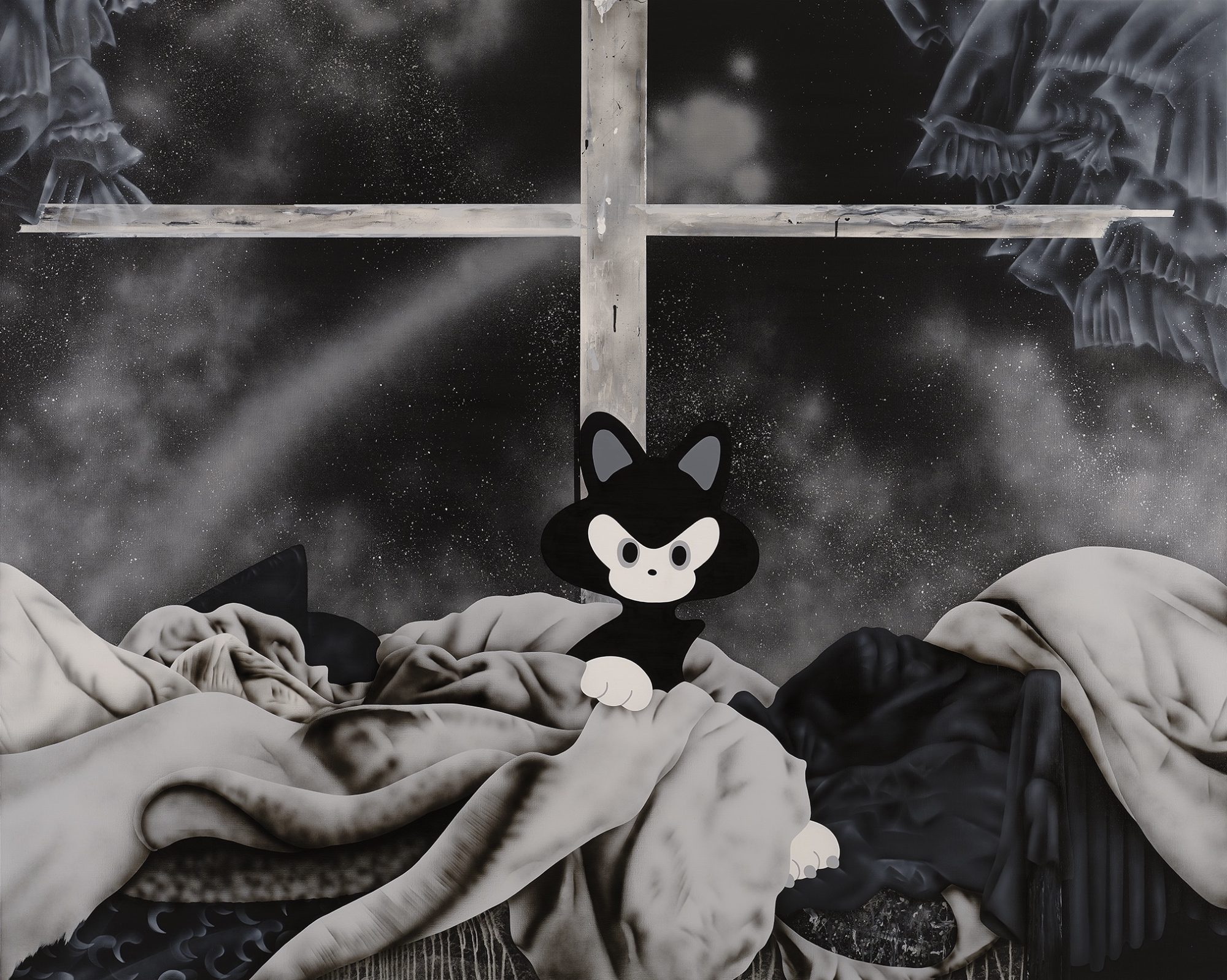 The Mass presents BLOOM, a solo exhibition by Tokyo based artist TIDE.  The exhibition will present all new works, including the most recent paintings from his ongoing CAT series, as well as the debut of a new painting series titled Life is Flat, and a three-dimensional installation that signifies a new chapter in his artistic practice.    BLOOM marks the second solo exhibition for the artist after his DEBUT exhibition at Gallery COMMON in 2020, both created in collaboration with HENKYO. The title of the exhibition is both a reference to the floral imagery that is present throughout his works, but also serves as a metaphor for TIDE’s developing identity as an artist. Within a short period of time, TIDE’s painting technique has progressed exponentially, with his style evolving into one full of layered complexity and detail. The title therefore serves as a personal challenge for the artist to grow in the pursuit of greater artistic challenges.

TIDE began his CAT series in 2019, and his feline character has evolved alongside his burgeoning career. Exploring themes of childhood, memory and nostalgia, TIDE’s works can be defined as an exercise in opposing juxtapositions. Set in eternal nightfall within an enigmatic domestic space, his works convey an uncanny sense of familiarity; simultaneously inviting and unsettling, alluring yet ominous. The central cat figure is like a children’s soft toy come to life, fulfilling our collective childhood fantasies by playing make-believe within an imaginary world. The backgrounds of the paintings feature soft furnishings, and a recurring motif of windows and billowing curtains that symbolise the intermediary between the inner and the outer world. Adopting the artistic trope of a window to represent spaces that are both real and fantastical; TIDE depicts his own mental landscape. The paintings draw from the artist’s personal memories, in particular recollections of his childhood bedroom at night, and capture the feelings and emotions of his past and present. This sense of sentimentality paired with ambiguity is a visual representation of the artist’s introspection, and the backgrounds can be interpreted as traces of memories constructed into a dream-like space.  The monochrome universe depicted in the paintings are deceptively simple, with closer inspection revealing the complex layering of techniques and painterly styles that differentiate between background and foreground. The background uses a combination of acrylic and spray to render a three-dimensional interior, whilst living characters in the foreground are rendered in contrasting two-dimensions, affirming the boundary between animate and inanimate, real and fantasy, two and three dimensions. TIDE furthers his exploration of the interplay between dimensions with the inclusion of three new large-scale works that feature a shaped cat canvas, returning the flat cartoon-like image into a sculptural form that can be moved in and out of the context of the painting.

The exhibition will also present a new series of paintings, Life is Flat; a continuation of TIDE’s unique, monochromatic style and technique that exists in the same world as the CAT series. The series can be seen as a reinterpretation of the still life genre, with each work depicting a different bouquet of flowers in a vessel or vase. The paintings follow the rules of TIDE’s painted universe, with the living objects, flowers, rendered in two-dimensions, whilst the inanimate vases exist in three dimensions, subverting the typical mimesis of the still life genre. The flowers are also placed in vases in the shape of recognisable figures such as The Hulk and E.T, juxtaposing delicate floral images with monstrous and alien motifs. The use of these characters from movies and TV from the 1980’s, further expand on these themes of childhood and nostalgia, bringing universal elements of popular culture into our collective consciousness.

PROFILE
TIDE was born in 1984 in Shizuoka, Japan, and currently lives and works in Tokyo. The self-taught artist first began painting while traveling abroad in Australia in his early 20s, returning to Tokyo and starting a career as an artist in 2009. TIDE was heavily inspired by the work of manga artist and historian Shigeru Mizuki, as well as old Hollywood movies and animations from the 30s to 50s, and began creating small scale and intricate pencil drawings in a pointillist style. He then began to explore various painting techniques, including watercolour and acrylic, and realised that these allowed for greater creative expression in both speed and scale. Continuous experimentation has led to his current multi-layered painting style that makes full use of these accumulated techniques, and his works draw upon universal themes of childhood and nostalgia to create a unique monochrome universe. TIDE has exhibited in Japan as well as internationally, having recently participated in group shows in Korea, Hong Kong, and the U.K., and exhibitions in New York and London set to take place in the near future. 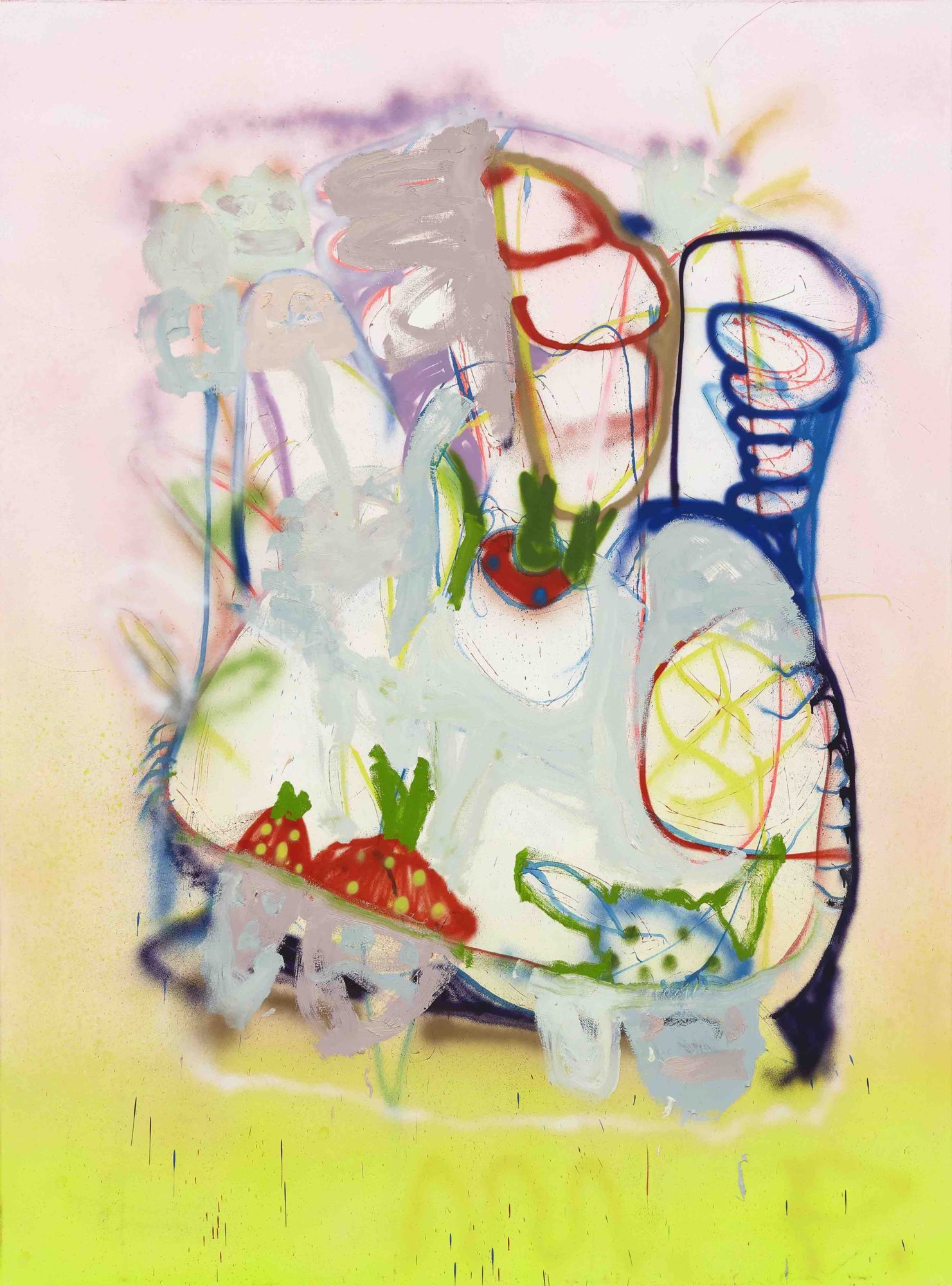 I CARE BECAUSE YOU DO

The Mass presents ‘I Care Because You Do’, a group exhibition of 15 international artists co-curated by The Mass and New York based curator Matt Black. The exhibition will explore the ways in which various artists from the end of the 20th century to the present day have elaborated, reacted and disrupted the narratives of Minimalism, Conceptualism and Post-Abstract Expressionism to create works that reflect the city environment in all its complexity.

©︎Courtesy of the artist and Tennis Elbow at The Journal Gallery, New York, New York.